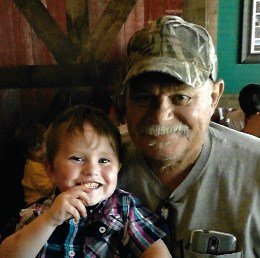 Please share a memory of Robert to include in a keepsake book for family and friends.
View Tribute Book

Memorial services for Robert James Violette, 66, of Hale Center, TX, and formerly Abernathy, TX, will be held at 10:00 am Monday, May 13, 2019, in the Abernathy United Church.  Cremation and services are under the direction of Abell Funeral Home & Flower Shop of Abernathy.

Robert was born September 24, 1952 in Port Hueneme, CA to Fernand Joseph and Dorothy Mae (Shaw) Violette, and was raised in Baldwin, IA by his step-father and mother, Stanley and Dorothy Mae Weets.  He graduated from Maquoketa, High School, Maquoketa, IA in 1970.  He enlisted in the US Navy, serving in the Vietnam era for 10 years, he then transferred to the US Army where he served until being honorably discharged in 1981.  He was stationed in Guam, working in search and rescue and helicopter repairs.  He moved to Lubbock from Houston in 1983, and married Georgia Teré Jackson, September 16, 1995, in Lubbock.  He was employed at the Lubbock Sheriff's Office as a Detention Officer for 11 years, retiring in 2014. Robert enjoyed woodworking and was an avid Dallas Cowboys fan.

He was preceded in death by his parents and step-father and 2 brothers.

He is survived by his wife, Georgia Teré Jackson of Hale Center, TX, a son, Kalvin Violette and wife Brittany and grandson Ethan Violette all of Abernathy, 3 daughters, Linda Smith, Brooksann Gomez and Blanca Violette all of Arizona, 4 grandchildren, and 3 great granddaughters.  He is also survived by 6 brothers, Martin Scott Weets and Tom Weets both of Missouri, Wayne Weets and Dale Weets both of Iowa, Edward "Skip" Beam of Wisconsin and Jerry Weets of Illinois, and 5 sisters, Nancy Hooton, Barbara Kemp, Virginia "Ginny" Mccoy and Mary Jo Geerts all of Iowa and Shirley Sallee of Montana.

The family suggests memorials be sent to the National Kidney Foundation, 5429 Lyndon B. Johnson Fwy, Dallas, TX 75240 or online at www.kidney.org.