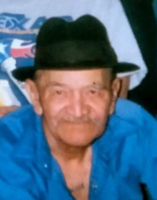 Services for Jesus Lara Dominguez, 89, of Abernathy, TX will be held at 10:00am, Thursday, April 21, 2022 in The Exchange Church, 1112 Jerome Street, Abernathy with Rev. Selso Torrez officiating. Burial will follow in the Abernathy Cemetery under the direction of Abell Funeral Home & Flower Shop of Abernathy. Viewing will be held at The Exchange on Wednesday, April 20, 2022 from 1:00pm until 8:00pm. An evening service will be held at 6:00pm, Wednesday, at The Exchange. Mr. Dominguez died Saturday, April 16, 2022, in Abernathy, TX, just 3 days shy of his 90th birthday. Jesus was born on April 19, 1932 in Edroy, TX to Juan & Juanita (Lara) Dominguez. He married Juanita Sifuentes in 1953 and was drafted by the United States to serve in the U.S. Army shortly after. Jesus fought for our country in the Korean War. Following his discharge, he returned to Juanita and the West Texas area where he farmed. They lived in the communities of Floydada, TX and Petersburg, TX before returning to Abernathy. A good man and a great dad, Jesus was also an avid sports fan cheering on his Dallas Cowboys. He is preceded in death by his grandson, Fabian Dominguez, 4 brothers and a sister. Jesus is survived by his wife, Juanita Dominguez of Abernathy, 8 children Albert Dominguez and wife, Brenda Hassell, of Abernathy, Jesse Dominguez and wife, Edna, of Lubbock, TX, Elionor Barrientoz and husband, Ruben, of Floydada, Lupe Galvan of Lubbock, Andy Dominguez of Abernathy, Nora Garza and husband, Albert, of Floydada, Juan Jose Dominguez and wife, Esther, of Denton, TX, and Abel Dominguez and wife, Crystal DeLaCruz of Abernathy, 26 grandchildren, 47 great grandchildren with 2 on the way, 3 sisters Mary D. Natal of Abernathy, Minnie Resendez of Dalhart, TX, and Maria Flores of Grand Prairie, TX and 2 brothers Sammy Dominguez and Steve Dominguez.