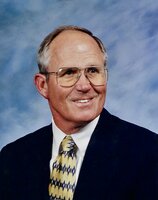 Services for Bobby Cunningham, 82, of Lubbock, TX will be held at 2:00 pm Friday, April 1, 2022, in the Abernathy First Baptist Church with Bobie Miller and Rev Damon Pearce officiating. The family will gather to receive friends from 6:00 pm until 7:30 pm, Thursday, March 31, 2022, at Abell Funeral Home. Burial will follow in the Littlefield Memorial Park, Littlefield, TX, under the direction of Abell Funeral Home & Flower Shop of Abernathy, TX. Bobby was born January 27, 1940 in Littlefield, TX to T.J. and Frieda Cunningham. He was the ninth child of eleven total. He attended all twelve years of school in Littlefield, TX. His proudest achievement during those years was winning the mile run at State in 1957. He continues to hold the record for Littlefield High School in that same event sixty four years later. He played football and always remained a true Wildcat. It was also during his high school years that he gave his heart and life to Jesus Christ. He always credited his sister and brother in law, Herb and Bettye Funk, and his future wife Missy, in leading him to what he considered the most important decision of his life. He attended East Texas State in Commerce, TX on a track scholarship for a short time until he returned to Littlefield and the love of his life Missy Bridwell. They enjoyed sixty two years of marriage. He and Missy had two sons, Scott and Shane. While in school he had many jobs, working at the Littlefield Compress, the Dairy Queen, the Littlefield newspaper, and helped build the current Littlefield Wildcat football stadium. He worked at the bowling alley in Dimmitt, TX when he and Missy married. Shortly thereafter, he went to work for his father in law, Ace Bridwell at Littlefield Butane Company. In 1964 they purchased “66 Butane and Fertilizer” in Abernathy, TX where they resided until 2010. He bought Littlefield Butane Company from his father in law in 1991. Both his sons helped operate the two businesses. They sold the Abernathy business in 2001 and Littlefield in 2009. In 1979 he began running again. He ran many marathons from the Amarillo and Lubbock races to the Dallas, Houston, Phoenix, New Orleans and Boston races. He placed eighth in his age group in the elite Boston Marathon and at one time was rated 19th in the world in Runners Magazine. He was a well known member of the West Texas Running Club for many years. One of Bobby's greatest joys was his family, especially being Popsie to his grandchildren Ashley, Kayley, Cortni and Cooper and great grandson, River Shane. He was prepared for this by playing an important role in helping raise nieces Brooke and Brittany Longino. He loved playing and just being a grown kid with all of them. Soon there will be more great grand babies that will always be told stories of their Popsie and what a special granddad he was. Bobby is survived by his wife, Missy of the home, son Scott (Angie) of Littlefield, TX, four grandchildren, Ashley Cunningham (Mike) of Brady, TX, Cortni McKay (Jordan) of Lubbock, TX, Kayley Childs (Michael) of El Paso, TX, and Cooper Cunningham (Skylar) of Lubbock, TX and one great grandson, River McKay. He is also survived by his brother Johnny Cunningham (Dallas) of Nevada, three sisters, Margaret Stone of Wylie, TX, Jane Parker of Lebanon TN, and Ann Carson of Sudan, TX. He is also survived by his sister and brother in law, Kim and Dana Longino of Wylie, TX and many nieces and nephews. He is preceded in death by his son, Shane Cunningham, February 23, 1998, his parents, his mother and father in law, five sisters and one brother. The family suggests memorials be sent to the Shane Cunningham Memorial Scholarship Fund, c/o AISD, 505 7th Street, Abernathy, TX 79311, or the Braxton Blair Fund, 809 Forest Edge Lane, Wylie, TX 75098 or to the Abernathy First Baptist Church, 411 7th Street, Abernathy, TX 79311 Services will be livestreamed at www.fbc-abernathy.org or on the church's Facebook page "FBC - Abernathy"