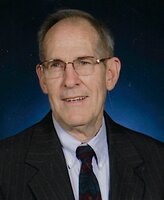 Memorial services for Frank R. Scott, 86, of Amarillo will be held at 9:30 a.m. Monday, December 6, 2021 at Paramount Baptist Church, Amarillo with Reverend Lance Herrington and Reverend Danny Mize officiating. Graveside services will be held at 2:30 p.m. that afternoon at the Abernathy Cemetery with Reverend Damon Pearce officiating. Viewing will be held at Abell Funeral Home, from 2:00 p.m. until 5:00 p.m., Sunday, December 5, 2021. Services are under the direction of Abell Funeral Home and Flower Shop of Abernathy, TX. Frank Scott (Granddad) passed peacefully to his eternal home Friday, November 26, 2021. He was born November 24, 1935, in Anson, TX to William Allen and Ada Mae (McCamont) Scott. He graduated Anson High School in 1954 and began service in the United States Army from 1954 to 1956. Frank fell in love hard with Lillian Christine Bradley, and married her January 5, 1958 in Abernathy, TX. He became an ordained deacon at Trinity Baptist Church on January 28, 1970, and he served there as an RA Leader and baseball coach. Later in life, Mr. Scott was a faithful member of Paramount Baptist Church where he was a regular participant in the men’s Bible study, and he lent his lovely singing voice to The Glory Choir. He was also a volunteer champion for a Parkinson’s Support Group and Hospice of the Southwest for many years. He also drove a van to make sure local students and adults had access to English as a second language classes. Frank loved the mountains and all the activities they held. He cultivated his dry sense of humor through the years, and he often showed his love through a well-timed, sarcastic quip. His favorite joke was telling his grandkids that he could “authorize them to do anything because he had arthritis.” Frank was preceded in death by his wife, Lillian Christine Scott, June 30, 2012, and five brothers, Theron Scott, Lloyd Scott, Robert Scott, Harris Scott, and Mack Scott. He is survived by his children, Kenneth Scott and wife Karla of Luling, LA and Jamie Wilkinson of Amarillo, TX, 5 grandchildren, Joshua Benge and wife Rene, Kelsey Scott, Matt Morgan and wife Jenny, Jaci Morgan, and Molly Bergeron and husband Hunter, 3 great-grandchildren, Kamia Benge, Caleb Benge, and Jaelynn Morgan, and 2 sisters, Margaret Scott of Amarillo and Rose Stubbs of Austin, TX. Granddad’s family suggests memorials be sent to the Lottie Moon Christmas Offering at Paramount Baptist Church, 3801 S. Western, Amarillo, TX 79109 or to Faith City Mission, P.O. Box 870, Amarillo, TX 79105.