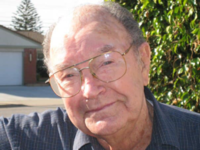 Services for Curtis C. Lebow, 97, of San Angelo, TX, will be held at 11:00 am Saturday, January 18, 2020 in the Abernathy First Baptist Church with Rev. Jim Brown officiating. Burial will follow in the Abernathy Cemetery under the direction of Abell Funeral Home & Flower Shop of Abernathy, TX. The family will gather to receive friends from 6:00 pm until 7:00 pm Friday, January 17, 2020 at Abell Funeral Home. Mr. Lebow died Monday, January 13, 2020 in San Angelo, TX. He was born May 30, 1922 in Happy, TX to Sam Houston and Menervia Elizabeth "Lizzie" (Herrin) Lebow. He graduated Abernathy High School and moved to Plainview, TX following graduation, where he lived from 1939 until 1942 to work for his older brother Cecil. Curtis married Ruby Christine Houpt, December 8, 1941 in Plainview, and she preceded him in death November 26, 2012. He served in the US Army Air Corps from September 10, 1942 until December 19, 1945. Following his honorable discharge from the Army Air Corps, he resettled in Abernathy, became a member of the Masonic Lodge and was a lifetime member of the First Baptist Church. In 1969 he moved to Amarillo and retired from Southwestern Public Service in 1985. He moved to San Angelo in 1999, where he remained until his death. He is survived by his daughter, Paulette Glenn and husband Eddie of San Angelo, TX, a son, Lloyd Lebow of Oxnard, CA, grandchildren, Betsy Thibodeaux and husband Eric, Curtis Glenn and spouse Patrick Calhoun, Cari Hanson and Anna Campbell, Great Grandchildren, Savannah Thibodeaux, Andrew Thibodeaux, Ernest Reuting III, Annabelle Reuting, Corey Bowen and Casey Bowen, 2 sisters, Oleata Buzbee and Tressie Snider and a brother, Cleatus Lebow and wife Joanne. The family is requesting that those attending the funeral services for Curtis Lebow, wear something red, honoring him with his favorite color.